UPDATE July 15, 2012: On Saturday I noted that the following responses from Benjamin H. Nuvamsa and Rosanda Suetopka Thayer focused on Micah Loma’omvaya’s (Hopi Chief of Staff) role in distributing last week’s Hopi Tribe LCR Settlement Agreement “Fact Sheet“. I now realize that their comments refer to a Press Release that the Hopi Tribe issued on July 12 surrounding Rosanda Suetopka Thayer’s efforts to remove Chairman Leroy Shingoitewa from office. Click here for a copy of the Press Release. I apologize for the confusion.

—————————————————
Benjamin H. Nuvamsa, July 13, 2012
There seems to be certain amount of credence placed recently by the local news media on comments, quotes, etc. from staff (political appointees) other than directly from the Hopi tribal chairman Leroy Shingoitewa, particularly concerning the current water rights debate.  Be advised that we do not place any credence or credibility on comments made by Shingoitewa’s staff, like comments by Micah Lomaomvaya.  Micah is not tribal chairman, vice chairman; and therefore has no authority to speak on behalf of the Hopi Tribe.  He has no authority to be issuing press releases, or making comments on any matter in the papers.  Those authorities are vested in the tribal chairman.  Those authorities and protocols are similar to the Office of the President of the United States.  We do not see any press releases, nor comments coming out of Vice Chairman Honanie’s office, because he understands and respects the proper delegations of authority.  He understands the protocols and when it is an appropriate time to issue statements on behalf of his office, or on behalf of the tribe.  Thank you.
———————————————–
Rosanda Suetopka Thayer, July 13, 2012
“Its truly unfortunate and completely unprofessional that Micah Loma’omvaya, chief of staff for Mr. Shingoitewa, without formal Hopi Council authorization to release such a ill-informed press statement regarding the Hopi and Tewa grassroots movement to remove Shingoitewa for serious neglect of duty.
Only the Hopi Tribal Council through formal action or the Hopi chairman with council authorization can speak on behalf of the tribe, not a politically appointed staff member like Loma’omvaya.
For me personally, Loma’omvaya’s release shows the level of paranoia, intimidation and lack of signature accountability, that Shingoitewa has created and fosters at the Hopi Tribe against anyone who opposes him, including all members of the media, tribal or non-tribal.
This has been evidenced by Shingoitewa’s refusal to allow reporters into local publicly posted Hopi council meetings over his past two years in office including the Hopi Tribes’ own newspaper, the Hopi Tutuveni, which is the only local and free news medium available to Hopi community members for public information.
No community member, enrolled or un-enrolled is safe from Shingoitewa and his supporters, especially after such a heated public battle where clearly the Hopi and Tewa people did not support Shingoitewa’s LCR settlement proposal and in which Shingoitewa continues to try and re-visit an already dead tribal water issue.
The “Shingoitewa Removal” public meeting slated for Saturday, July 14th at the First Mesa Consolidated villages community will still move forward with the full open support of Hopis and Tewas who want Shingoitewa removed from office for serious neglect of duty.”

Thanks to Micah Loma’omvaya, Chief of Staff for the Hopi Tribe, for sending me the following documents to post on BEYOND THE MESAS. Click images to download.

While the following press release notes that the “Hopi Tribe” endorses the Little Colorado Water Rights Settlement, opinions and policies passed down from the Hopi Tribe do not reflect the opinion of all Hopi people or villages. Many Hopis are against SB 2109 and the Little Colorado Water Rights Settlement that Hopi Chairman LeRoy Shingoitewa proposes here. Keep an eye on this space, as Hopi responses are sure to follow.

Kykotsmovi, Ariz. (June 21, 2012) – The Hopi Tribal Council voted today to endorse a  proposed water right settlement for the Tribe’s Little Colorado River water right claims.  The  proposed settlement would end decades-long water rights adjudication and is the first step in  ensuring a dependable supply of clean water for the Tribe.  “I am greatly pleased by the  Council’s decision,” stated Hopi Tribal Chairman LeRoy Shingoitewa.  “For the first time since
our reservation was established we will be able to guarantee clean, reliable water supplies for our people.”

Council Representative George Mase, Chairman of the Tribal Council’s Water and  Energy Team, agreed with Chairman Shingoitewa’s assessment:  “After talking to the Hopi  people and hearing their concerns, it is clear that the people want a clean and reliable water  supply.  Our team negotiated for years to reach a settlement, and I am pleased that the Council  decided to endorse the settlement.”

The Hopi Tribe has claimed reserved water rights from four sources:  on-reservation surface water and groundwater, surface water from the Little Colorado River, and surface  water from the mainstem Colorado River. The proposed settlement would confirm the Hopi  Tribe’s rights to on-reservation surface water and groundwater, reserve a quantity of water from the mainstem Colorado River for a future settlement the Hopi Tribe’s mainstem water  rights claims, provide for the development of essential on-reservation water delivery infrastructure, and establish a framework for the sustainable management of the N-Aquifer  which is currently threatened by unmanaged pumping.  In return, the Tribe would waive its  claims to the Little Colorado River and its damages claims for injuries to water rights or water quality that occur before the settlement goes into effect.

“The Little Colorado River is by far the least reliable of our four potential water sources,” explained Councilman Mase.  “This is a fair tradeoff.”

Chairman Shingoitewa agreed with Councilman Mase’s assessment.  “We are confident the benefits for the Hopi Tribe outweigh the risks of continued litigation,” explained Chairman Shingoitewa. “The settlement proposal provides a path to ensure a lasting supply of clean water for both tribes. Hopefully the Navajo Nation will endorse the settlement as well.”

In order to become effective, Congress also must ratify the settlement and appropriate funds for the development of projects specified in the settlement.  The Hopi Tribal Council voiced its concerns about the proposed federal legislation, which was introduced before the agreement was reached.  The Council has previously instructed Chairman Shingoitewa and Water and Energy Team’s Chairman Mase to co-sign a letter to Senators Kyl and McCain asking for changes in their proposed legislation.  Specifically, the Tribal Council will be asking Senators Kyl and McCain to remove provisions related to the Navajo Generating Station and other items contained in the federal legislation.

“These provisions have nothing to do with our settlement,” explained Chairman  Shingoitwea.  “Therefore, we are asking Senators Kyl and McCain to remove them from the settlement legislation.”

The Hopi Tribe also will seek support for solutions to address water contamination at Moenkopi, First Mesa, and Keams Canyon.  “These are important outstanding issues,” said Councilman Mase.  “We aren’t waiting for the proposed Hopi Groundwater Project to get them resolved.”

A message from Ben Nuvamsa….

Attached for your information and dissemination is a complaint we (the former elected leaders of the Hopi Tribe who endorsed Action Item H-065-2012) filed against Hopi Chairman Leroy Shingoitewa for his failure and/or refusal to sign a duly enacted Tribal Council Resolution H-072-2012 that was passed on June 15, 2012, at the Hotevilla Elderly Center.  This resolution opposes and rejects Senator Jon Kyl’s Senate Bill 2109, Navajo-Hopi Little Colorado River Water Rights Settlement Act of 2012.  This Resolution was approved/passed by a majority vote of: 11 for; 4 opposed; 0 abstentions.  It represents the express will of our villages, village leaders and tribal members.

Even if Shingoitewa refuses, or otherwise fails to sign Resolution H-072-2012, he does not have the constitutional authority to veto a lawful action of the Hopi Tribal Council.  Therefore, this Resolution is in full force and effect, and has the force of tribal law.  If he continues to not sign this Resolution, by this letter, we have implored the Hopi Tribal Council by the attached complaint, to take immediate and appropriate action against Shingoitewa for contempt of tribal council action and for his failure to uphold his duty and obligation as presiding officer of the tribal council, including immediate removal.

A copy of this complaint has been sent to the Hopi Tutuveni for publication, and to other local and national news media.  We asked that this complaint be published in full, unedited text so that all tribal members and the general public can be informed of this matter.  Please disseminate copies of the complaint letter to your fellow tribal members.  Thank you. 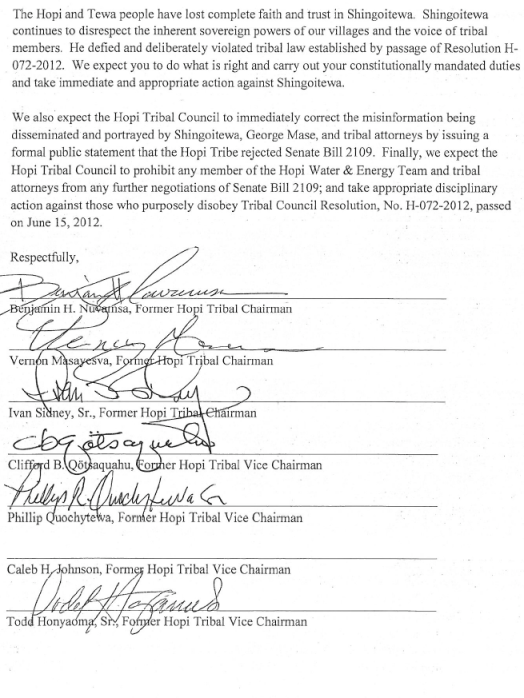 The following Memorandum was written by Hopi Tribe water rights attorneys Richard Monette and Joe Mentor. The Memo was submitted to the Hopi Tribal Council on June 15, 2012, the same day that the Council voted 11-4 to reject SB 2109 by adopting Hopi Tribal Council Resolution No. H-065-2012. The Memo outlines what they consider to be the legal implications for the Hopi Tribe if the Tribe endorses or rejects SB 2109. Click here to download the Memo as a PDF document. Used with permission. 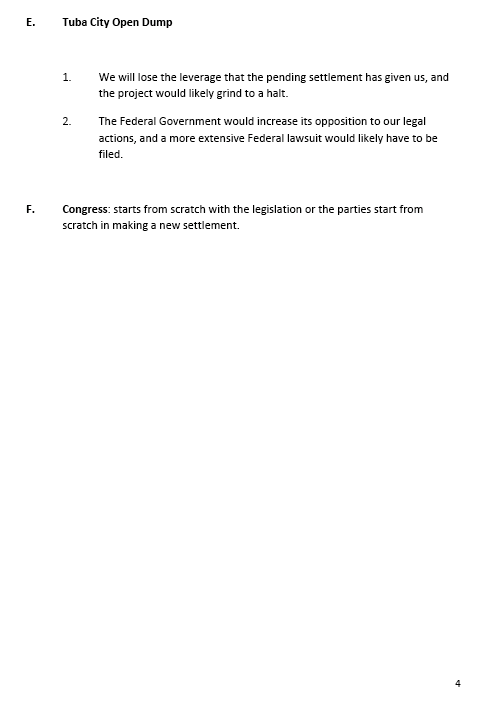 Below is an email from Ben Nuvamsa, former chairman of the Hopi Tribe, that he sent to a number of Hopis (including myself) on April 25, 2012. Please note that the documents that Nuvamsa refers to are included at the bottom of this post. Many thanks to Mr. Nuvamsa for allowing me to publish his email on BEYOND THE MESAS.

Attached is a copy of the tribal council agenda which contains Action Item No. 053-2012 and proposed council resolution that George Mase (Sipaulovi) endorsed as Chairman of the Hopi Water and Energy Team.  Also attached is a copy of the March 8, 2012 Agreement-in-Principle that attorneys for the parties have signed, including Joe Mentor on behalf of the Hopi Tribe.  Note that the Agreement says they will endeavor to support S.2109, subject to the review and approval of the governing bodies.

Remember, neither Leroy Shingoitewa, George Mase, the Hopi Water & Energy Team, nor the Hopi Tribal Council have the legal authority to commit to endorsing S.2109.  This is the sovereign right of the villages.  Only the villages have a legal and sovereign right to decide on this matter.  In addition, only four (4) villages are represented on the tribal council, leaving out the remaining villages.  None of the traditional villages are represented.