Nineteen years ago on December 6, 1990, Polingaysi Qoyawayma (Elizabeth Q. White), passed away with family at her side in Phoenix, Arizona. Born in 1892, Polingaysi was from the village of Orayvi on T

hird Mesa, and she is perhaps best known for her book (as told to Vada Carlson) No Turning Back: A Hopi Woman’s Struggle to Live in Two Worlds. I never had the honor of meeting Polingaysi, but her story is often told among our people. In November 1906, shortly after an internal dispute in her village, Polingaysi left by wagon with a group of Hopi children to the small town of Winslow, Arizona. From there she boarded a Santa Fe train to San Bernardino, California, then traveled south to Sherman Institute in Riverside. She experienced a different life in the “land of oranges,” and she wrote at length about her time at Sherman in No Turning Back. After spending almost three years at the school, Polingaysi returned to Orayvi and found it difficult to acclimate to reservation life. She eventually became the first Hopi to teach at a Hopi day school, and she encouraged her students to take the best of Hopi and American culture to succeed as a people. Although Polingaysi is often associated 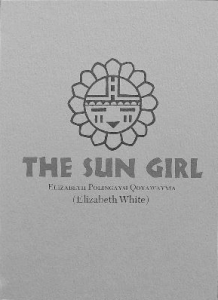 with No Turning Back, she also wrote a second book in 1941 titled The Sun Girl, which was illustrated by Hopi artist Komoki. In this children’s book, Polingaysi retells a story of a young girl named Dawamana (“Sun Maiden” or “Sun Girl”) from Orayvi who learns the Butterfly Dance at the village of Moencopi. In the foreword to the book’s 1978 edition, Robert Breunig of the Museum of Northern Arizona notes that “Mrs. Qoyawayma told this story many times to her school children. They became so enthralled with it that they asked that it be repeated again and again, and they learned it almost word for word, correcting deviations from one telling to the next. Finally, Mrs. Qoyawayma wrote the story down in the hope that all children would enjoy it.” Nineteen years after her passing, Polingaysi’s life and work are still remembered. She is one of the most revered teachers and writers in Hopi history, and her example and words continue to have great meaning and relevance for those in the present.