To The Hopi and Tewa People:

On January 27, 2011, Hopi and Tewa people will be going to the polls to vote on a new tribal constitution that will replace our 1936 constitution, if the injunctions filed in tribal and federal courts by tribal members do not stop the election.  It is sad that many of the voters simply do not know what is contained in the proposed new constitution, Draft 24A, because the proponents failed to explain to them, in detail, the provisions of the proposed constitution.

The Hopi Tribal Council, on August 4, 2010, voted to allow the Secretarial Election to proceed, without knowing the full implications on our way of life.  The Hopi tribal leadership and council members that voted in favor of the action item failed to listen to tribal members who expressed grave concern over this draft.  Tribal members wanted to have input but were denied.  So once again, our tribal government has divided us.

A few of us who are concerned about the impacts the Draft 24A, took it upon ourselves to educate our people.  In our sessions, we found most, if not all are opposed to the proposed constitution.  We found that people are very angry at the tribal leadership for allowing this to happen without full consultation and their input.  Tribal members are adamant that we do what we can to preserve our traditional ways of life.

I cannot help but think of all the hard work and thought processes that the framers of our original 1936 constitution must have gone through to craft a document that has sustained us for over 75 years.  They were visionary people.  They were not divided and cared for the future of our people.  My grandfather, Peter Nuvamsa, Sr., our first tribal chairman, was one of the spokesmen along with Irving Pabanale, Albert Yava, and George Cochise.  Our village chiefs, Kikmomgnwit, throughout the villages were consulted, including Kutka and Tunewa (Sichomovi and Walpi), Sateli (Tewa), Talahevtewa (Shungopavi), Masaquaptewa (Sipaulovi), Komalevtewa (Mishongnovi), Lomavitu (Kykotsmovi), Tawakwaptewa (Oraibi), Kochongva (Hotevilla), Kiwanimptewa (Bacavi) and Siemptewa (Moenkopi).

The leaders and framers gave specific instructions to Oliver LaFarge to craft language that protected village sovereignty and our traditional ways.  They made sure the following provision was included: “Each village shall decide for itself how it shall be organized.  Until such a village shall decide to organize in another manner, it shall be considered as being under a traditional Hopi organization, and the Kikmongwi of such village shall be recognized as its leader”. (Emphasis added).  The leaders made sure the sovereign right of our villages was not delegated to the Hopi tribal council.  They made sure we did not simply adopt an Indian Reorganization Act template constitution.  But now, we are faced with a proposed constitution that is modeled after the Cheyenne-Arapaho Tribes’ constitution where Robert Lyttle participated in drafting their constitution.

Draft 24A destroys our traditional village governments because it contains the following replacement language: “Each village shall decide for itself how it shall be organized, including selection of its council representatives subject to section 3(b)(vi) below. Each form of village organization shall be consistent with the constitution”. (Emphasis added).  The new language eliminates a village’s decision-making right and eliminates them as “traditional organizations” and will require the villages to adopt new village constitutions that must be consistent with the new tribal constitution (Draft 24A).

There are many other things wrong with Draft 24A, including the complete elimination of Article XI – Taxation, from our current tribal constitution.   If 24A passes, the Hopi Tribe and villages can no longer impose taxes, fees, duties and assessments to produce revenues.  The tribe’s budget is heavily dependent on these revenues and will be impacted significantly.  Villages depend heavily, if not solely, on annual allocations from the tribe’s general fund.  Bringing our sovereign villages in as a fourth branch of tribal government is a foreign concept, even to how the United States and state governments are organized.  Draft 24A gives the tribal council and the president very broad powers and we lose the “balance-of-powers” controls.

The election process is also highly questionable.  While the Secretarial Election, by law and regulation, is the sole responsibility of the Bureau of Indian Affairs, we all know the tribal chairman and his staff is actually running the federal Secretarial Election while the local BIA offices stand by and allow it to happen.  Once the BIA assumed control and responsibility when it authorized the Secretarial Election on November 4, 2010, our voter registration and personal information came under the control of the federal government and protection under the federal Privacy Act, but the tribal staff gained direct and unauthorized access to our records.  As a result, some voters received a letter from the tribal chairman’s office in an attempt to sway their votes using the addresses of the registered voters.  Because of the breach of our privacy, I am no longer confident that we will, in fact, have a clean, legitimate election.

It is unfortunate the tribal council (the 8 members that voted in favor) did not consider the full impacts of Draft 24A and did not allow for full dialogue on this draft before they voted to approve the action item on that infamous day of August 4, 2010.

Federal rules require that only 30 per cent of the 1,488 registered voters are required to cast their votes to make this a legitimate election.  This means a minimum of 446 votes must be cast and a majority of those votes, or a minimum of about 227 votes, are required to approve Draft 24A.  We only hope and pray that Hopi and Tewa people will make an informed decision before casting their votes.

Comparison between Old and “New” (Proposed) Hopi Constitution (Beyond the Mesas)

Vote no on draft 24A (Monica J. Kahe, Navajo-Hopi Observer)

We have the opportunity to make changes (Elgean Joshevama, Navajo-Hopi Observer)

Hopis have a great opportunity to help their tribe (Anthony Honanie, Navajo-Hopi Observer) 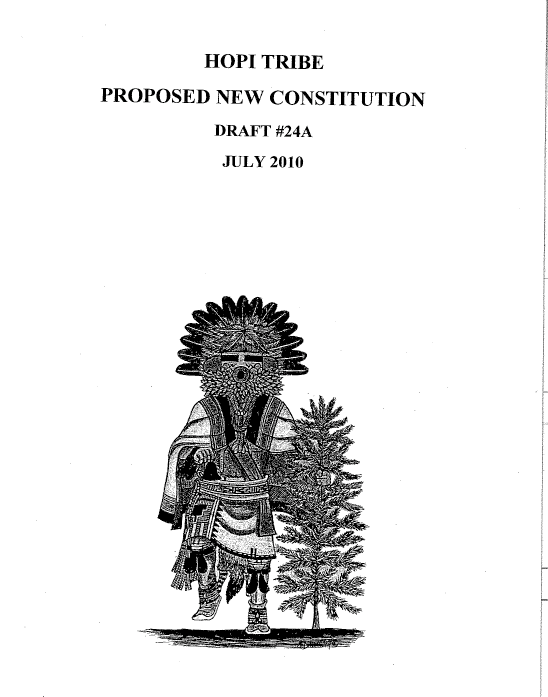