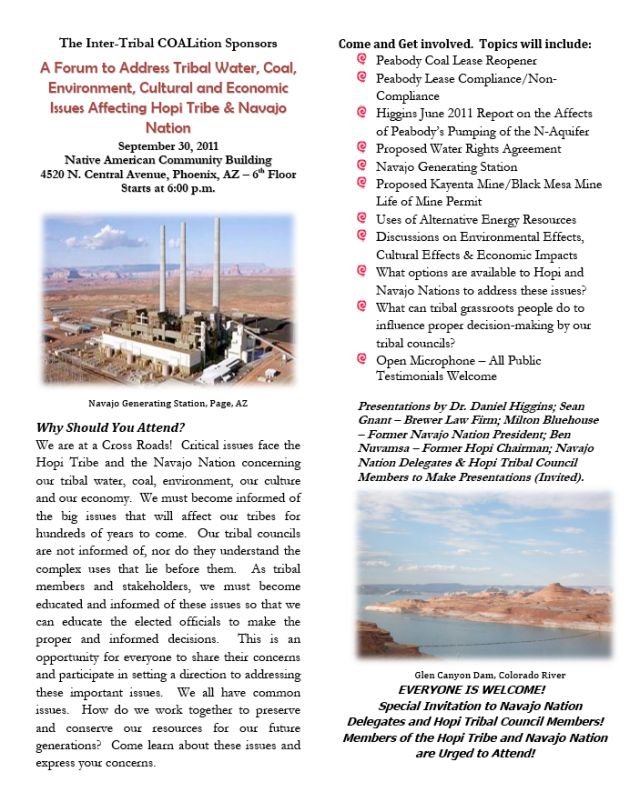 A message from The Inter-Tribal COALition Sponsers…

Hopi and Navajo coal and water are a precious commodity that are the envy of the State of Arizona, Southern California, Nevada, federal government, Peabody Coal Company, Salt River Project, owners of the Navajo Generating Station, cities and towns in the Southwest, and the southern Arizona Indian tribes, among others.  These entities have competing and conflicting interests in our precious natural resources, yet they have not been willing to compensate our tribal nations for mining and pumping of our resources at fair market value. We are at a critical “Cross Roads” and time is ripe for us to exercise our sovereign rights to seek economic and environmental justice, yet our tribal councils have been agreeing to the demands of the federal government, Peabody Coal, Salt River Project, et. al., while compromising any leverage we may have to maximize economic benefits for our people, promote and require environmentally and culturally relevant operations in generating electricity.

Our resources make it possible for the federal government to meet its obligations with tribes in Southern Arizona under their water rights settlements.  Our coal and water make it possible to generate electricity for lift stations along the massive Central Arizona Project water delivery systems so that the tribes and municipalities can receive their surface water needs.  Our coal makes it possible for families in Arizona, Nevada and Southern California to enjoy the conveniences of having electric power in their homes.

Recently both Navajo and Hopi tribes agreed to settle the RICO lawsuits with the federal government, Southern Cal Edison and Peabody Coal (and hold them harmless for past violations) without consulting with tribal members.  A huge proposed water rights settlement agreement is now before the tribes for consideration.  There have been numerous lease violations at Black Mesa by the Peabody Coal Company which have gone unaddressed for years.  Recently, President Obama withdrew EPA’s proposed air emissions standards that would have affected the Navajo Generating Station and other coal powered power plants.  And while the federal government and Peabody Coal Company have been asserting that there are no damages to the N-Aquifer from Peabody’s excessive withdrawals of the N-Aquifer, there is a recent study that challenges these claims.

We invite you to come to this forum to learn about these issues and talk about what we, as tribal members and tribal nations, can do to address these issues.  Knowledge is power.  Learn about these complex issues so that you can hold your council members accountable for making informed decisions on your behalf.  Special invitations go out to Hopi and Navajo tribal members (reservation and off-reservation), and council members/delegates from both tribes.  Spread the word.