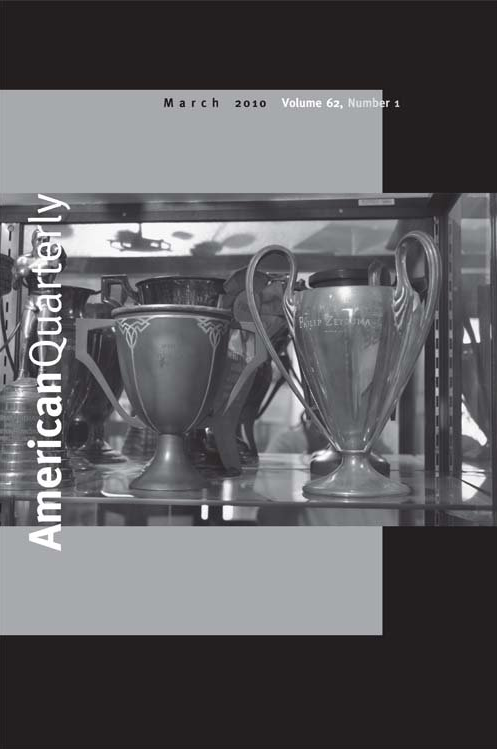 For the past three years I have been working on a book on Hopi long distance runners and the American sport republic. Part of this project includes an article that I wrote titled “Hopi Footraces and American Marathons, 1912-1930.” This article recently appeared in the March 2010 Issue of American Quarterly (Vol. 62, No. 1, pp. 77-101). The American Quarterly is the flagship journal of the American Studies Association.

The photograph featured on the cover of the journal (pictured above) is of two trophy cups that Hopi runner Philip Zeyouma won at Sherman Institute. I took this photo at the Sherman Indian Museum in Riverside, California. Not long after the school established its cross-country team, Zeyouma won the Los Angeles Times Modified Marathon in April 1912. His victory also gave him an opportunity to compete in the 1912 Olympic Games in Stockholm, Sweden.

When Hopis such as Zeyouma, Harry Chaca, Guy Maktima and Franklin Suhu competed on the Sherman cross-country team, and Louis Tewanima ran for the Carlisle Indian Industrial School, their cultural identities challenged white American perceptions of modernity and placed them in a context that had national and international dimensions. These dimensions linked Hopi runners to other athletes from different parts of the world, including Ireland and Japan, and they caused non-Natives to reevaluate their understandings of sports, nationhood, and the cultures of American Indian people.

This article is also a story about Hopi agency, and the complex and various ways Hopi runners navigated between tribal dynamics, school loyalties, and a country that closely associated sports with U.S. nationalism. It calls attention to certain cultural philosophies of running that connected Hopi runners to their village communities, and the internal and external forces that strained these ties when Hopis competed in national and international running events.

The back cover of the journal (pictured below) features a photograph that I took on the edge of Third Mesa near the village of Orayvi. At one point in the article I describe how one can stand in this location and see for miles in all directions:

To the south, the land extends beyond the Hopi mesas and the silhouette of Nuvatukiyaovi, or the San Francisco Peaks, is visible in the distance. In the valleys below, corn, melon, and bean fields stand out as green patches against a backdrop of earth and sandstone. From on top of the mesa one can enjoy the sweet smell of burning cedar, hear and feel the wind blowing over the mesa edge, and behold a breathtaking landscape surrounded by a canopy of deep blue sky. Looking east toward the village of Shungopavi on Second Mesa, running trails stretch from Orayvi like veins that connect and bring life to each of the Hopi villages. The trails near Orayvi give testimony to the tradition of running in Hopi culture and the continuance of running among today’s Hopi people. [p. 79]

I am indebted to several individuals who helped me revise this essay, including my colleagues at the University of Illinois, various Hopi and non-Hopi scholars, the Hopi Cultural Preservation Office, Lorene Sisquoc of the Sherman Indian Museum, and American Quarterly editors Curtis Marez, Jeb Middlebrook and Stacey Lynn.

One of these former students was Bessie Humetewa from the village of Bacavi. She attended the school from 1920 to 1928.  Bessie also appears in Beyond the Mesas where she recalls that she stayed at Sherman “all eight years without coming home.”

At the time of the interview Bessie was blind, and so when I gave her the coin she examined it with her hands. Before I could tell her what was depicted on the coin, she said to me, “this is Sherman.”

She was able to discern the raised design of the school’s main building, the palm tree, and the superintendent’s office. The bronze coin reconnected Bessie to her alma mater. It took her back seventy-six years to when she last attended the Indian school in Riverside, California.

As part of the school plan the outing system is practiced each year. Students have no difficulty securing positions, the girls in the best families in Southern California and the boys on ranches or other industrial lines.  The extensive production of oranges, berries, and other fruits, cantaloupes, and grain furnish employment for the boys at all seasons.  The practice of sending out students for experience and to earn a little money during vacation is an advantage to the students, but it is not compulsory.  The wishes of the individual and of parents, if necessary, are always consulted.  – Sherman Institute Booklet (1908), Sherman Indian Museum, Riverside, California

One of the gaps in the historiography of Indian boarding schools is a book length study on the Outing System. Government officials established Outing programs at off-reservation Indian boarding schools to create an Indian working class. At Sherman Institute, the boys labored on farms and ranches, while the girls worked in homes in the greater Riverside community.

Although school officials wanted the girls to be exposed to the  so-called civilizing influences of white Americans, the system ultimately “trained” girls to become domestic servants. The girls often spent their days cleaning, making food, and taking care of children who belonged to white families.

In BEYOND THE MESAS, Eilene Randolph and Leslie Robledo from the village of Bacavi on Third Mesa note that Hopi girls at Sherman did not have trouble securing work in the school’s Outing program.  Hopis had a reputation of being “hard workers,” and the people in the community routinely “hired up” the girls to work in their homes.

Local farmers were also eager to employ Hopi boys to work in their fields and orchards. The boys had come from an agricultural based society and used their knowledge of planting and harvesting in Southern California.

While I have written more about the Outing System in my book Education beyond the Mesas: Hopi Students at Sherman Institute, 1902-1929, and other scholars have examined the topic in their works, a comprehensive study (book) devoted entirely to this important program has yet to be published.