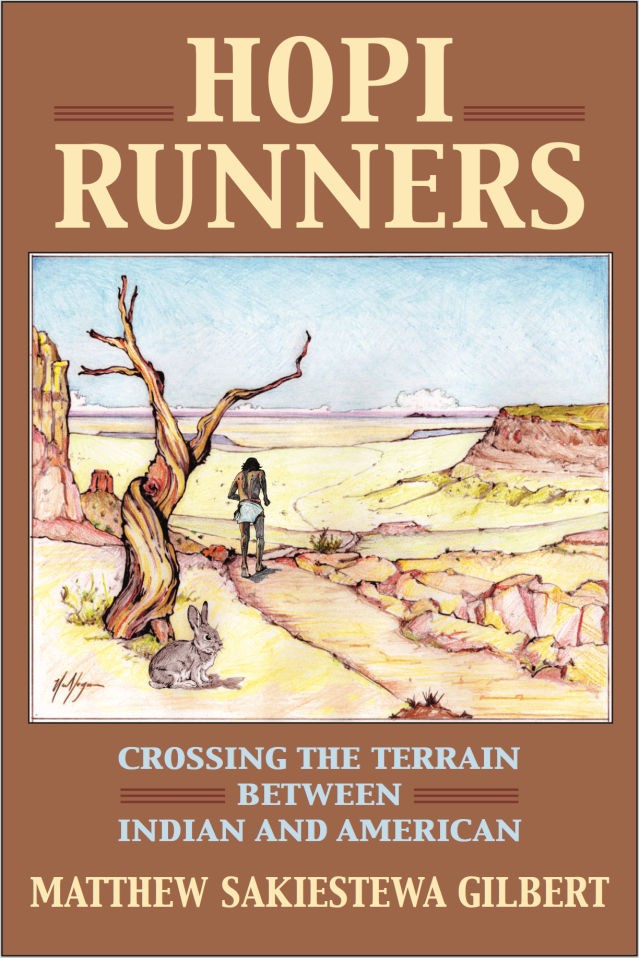 I am grateful for the support of so many people over the years who have encouraged me as I completed this project. I thank my family and friends, past and current students, colleagues at the University of Illinois, and numerous scholars here in the United States and abroad. I also thank the wonderful staff at the press, and of course, readers of this blog!

Last week, Craig Chamberlin of the University of Illinois News Bureau published a story about the book. You can access the story here. If you are interested in purchasing a copy of Hopi Runners, you can do so through Amazon or the publisher’s website.

Below is an excerpt from the book’s Introduction titled “To the Fence and Back.” The excerpt comes from a section of the Introduction where I describe Hopi runners who competed at federal off-reservation Indian boarding schools:

While Hopis participated in several sports, including basketball, football, and even boxing, their greatest success came as members of track and cross-country teams. Sports at off-reservation schools provided Native athletes opportunities that did not exist  for them on their reservations. When Hopis joined cross-country teams at Sherman Institute, or the Indian school at Carlisle, they experienced for the first time different regions of the country, life in modern cities, and a new way of running footraces. And Hopis used these opportunities to learn and interact with people from other parts of the United States and the world. While competing in marathons, Hopis ran with runners from Ireland, Germany, Sweden, and Japan, and although from vastly different cultures, they spoke a common – and perhaps universal – language of competitive running.

Having come from a society that valued long-distance running for ceremonial and practical purposes, Hopi youth transferred this cultural mindset with with them when they entered these faraway schools. Hopi runners who competed at Indian schools had come from a tribe of racers. While none of these athletes needed to be taught the essence of long-distance running, coaches nevertheless trained them in modern running techniques and rules to compete effectively in American track and cross-country events. The dirt trails on the reservation did not resemble the paved roads or clay tracks used in many American running competitions. And so, in their first year on a school’s cross-country team, Hopis learned about running in different locations, climates, and elevations. And they had to develop mental and physical strategies for running in cities, on mountain roads, or in front of thousands of cheering spectators in a stadium.

When Hopis ran on trails back home, they did so in a relatively quiet and peaceful environment, far from the sounds of locomotives arriving and departing towns such as Winslow. Running on or near the mesas, Hopis became attuned with their bodies and surroundings, becoming one with their environment. They listened to their own breathing, the sound of their feet tapping the trail as they danced on Mother Earth. They felt the rhythmic pounding of their heart telling them to adjust or steady their pace. And they listened to birds singing and the sound of the wind cutting through the canyons. And often they ran alone, experiencing physical ailments that all distance runners endure. “He was alone and running on,” Kiowa poet N. Scott Momaday writes of a Jemez Pueblo runner named Abel. “All of his being was concentrated in the sheer motion of running on, and he was past caring about pain.” In the high desert of Arizona, Hopi runners also beheld beautiful landscapes , greeted majestic sunrises and sunsets, and had unobstructed views for miles in all directions. Running with no distractions from the outside world, Hopis ran with “good hearts,” prayed silently for the well-being of their people, and sang songs to the katsina spirits to entice the rain clouds to follow them home to their villages.

However, the tranquil environment that encompassed the trails back home did not reflect the fast pace and at times chaotic life in large modern American cities…

7 thoughts on “Hopi Runners: Crossing the Terrain between Indian and American”